The Tallest Man on Earth @ The Middle East 4/21 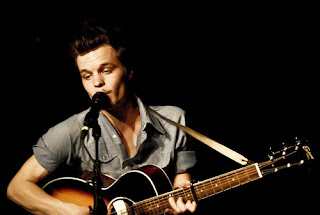 So much music nowadays is accommodated and amplified with sounds and instruments, that we forget that there are actually individuals behind the music. That is what is so beautiful about The Tallest Man on Earth; his music is stripped down to only a man with a raspy voice and his guitar. The passion of his words and his voice make his music so much more powerful than if a full orchestra surrounded him. This power was clearly visible during his sold-out show in the Middle East.
The show was opened by the band Nurses, which did a perfect job in building up the mood for what was to come. Their Indie folk sound could be described as a more electric version of Fleet Foxes. The crowd was very into the music, but it was obvious that everyone was anxiously waiting for The Tallest Man on Earth. When he finally came in and started signing, the entire crowd was utterly perplexed by what they were hearing. In the audience you could feel a strange charge of emotion by every person that was internally experiencing the music. There were moments of pure silence, where the audience was just breathing in the music. Like Dylan, as everyone says he resembles, Kristian Matsson is a poet. His lyrics are heartbreakingly beautiful. In the show everyone sang along to the song “The Gardener”. In which he sings to “stay the tallest man in your eyes”. He played almost every song of the album Shallow Graves from “I Won’t be found” to “Pistol Dreams”. In his concert, Kristian Matsson was definitely the tallest man in everyone’s eyes
Posted by: Lorena Alvarado

Email ThisBlogThis!Share to TwitterShare to FacebookShare to Pinterest
Labels: concert review, The Tallest Man on Earth