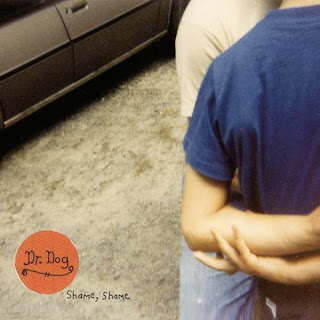 It took me a few listens to figure out why everyone seems to be all about Dr. Dog lately. It has been a while since I crawled out of my everything-that-sounds-remotely-folky-and-underproduced-with-simple-chords-and-vocal-harmonies-is-awesome phase. For a while, I had a bit of trouble placing a divider between Dr. Dog and that all-too-ubiquitous style that has suddenly become uncool by becoming cool. I'm not sure if the band's recent buzz made me try harder to like it or to hate it, but either way, I found the wrinkle that makes Dr. Dog worth a good deal of the praise they've garnered lately: it's not the 60s-rock gimmick, but the songwriting and subtleties that make Shame Shame a downright pleasant listening experience.

Effectively establishing a theme to pervade the entire album, "Stranger" starts things off by making you think; after a few measures of pondering, the intertwining vocal and guitar lines suddenly morph from bland to painstakingly clever. Similarly, the two chords (immediately distinguishable as D and G, for all you douchey music nerds) in "Shadow People" are inexplicably filled with color just as the three-part background harmonies come in to supplement the recurring "where did all the shadow people go?" in the chorus that will burn itself into your brain for hours.

By now, it's apparent that this band's biggest contribution to musical innovation is bringing it back to basics; who'd have thought a simple vocal melody or well-placed 4-note guitar lick could win over so many fans? The vocal trail in the chorus of "Unbearable Why," for example, seems to wrap itself around the reggae-influenced bassline like a ribbon, but it never quite meets up at the ends. The bass line in the title track does the something similar around the smokey Jim James-led backup vocals as the outstanding track trails off and grooves the album quietly to rest. These songs leave you wondering how something so catchy can be so intellectually challenging.

And then you realize, who cares? It's just music. If you like it, you like it. If not, you don't. Dr. Dog isn't here to blow anybody's minds...they didn't quite blow mine. But that shouldn't be a reason to let Shame Shame pass by. If anything, they encourage self-righteous music critics and pretentious self-proclaimed experts to get their heads out of their high horses' asses and trust their first instincts. For me, hopefully, that's exactly the lesson they've managed to give me in Shame, ShameThat, and a great summer driving record.