Radiohead - The King Of Limbs 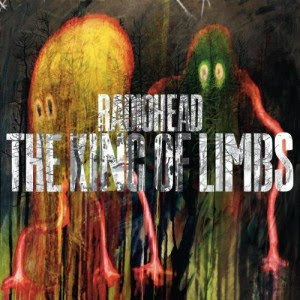 Bullshit aside, I'll say what most music critics think but don't write when reviewing a Radiohead record: I probably would have given it a positive review if Thom Yorke shoved a mic up his ass and recorded 40 minutes of intestinal activity with string accompaniments.

So with that out of the way, I'll be blunt and forthright; I like The King Of Limbs. And no, I didn't have to persuade myself. But there were enough gnawing questions about the album to ball up in the pit of my stomach every time I thought about writing this review without at least a month of thorough listening. Namely, what does its uncharacteristic brevity say about Radiohead's intentions of continuing to produce traditional full-length albums?; and how can I possibly compare The King Of Limbs to Radiohead's back-catalogue of (almost) invariably shock-inducing records when, comparatively, it seems to lack that leading-edge that has defined the band since the early 90s? More importantly, should I try?

Radiohead spent eight studio albums' worth of time jerking and jarring their inexplicably behemothic audience from extreme to abstruse extreme. Even if In Rainbows was a welcome, albeit considerable, lunge toward the digestible pop for which some fans had pined since 1995, its well-documented and unorthodox release needled the recording industry's decades-old caste system and challenged the manner in which listeners have been taught to honorably acquire music. Almost equally grating, though, in a juxtaposed manner, was the starkness with which In Rainbows reacted to its predecessor, Hail to the Thief, possibly Radiohead's most discordant record to date. Where Hail trenched its stone-sharpened talons into the listener's skin, imposing its tyrannical beats and unnerving melodies with no mercy, In Rainbows gave Radiohead fans a few years off from from the never-ending homework assignment of figuring them out.

But calming as In Rainbows may be, it is no less arresting than even the most dominating moments in Radiohead's discography. The likes of "Nude," "Reckoner," and "Videotape" seduce the undivided attention from the listener and authoritatively divert it to everything melancholy and beautiful, effectively making the difference between the two irrelevant. Meanwhile, the unfamiliar and chameleonic energy behind tracks like "15 Step" and "Weird Fishes" nuzzles in the short-term memory like a drug and commands renewal in copious and increasingly frequent doses. In Rainbows leaves its audience with no choice but to be profoundly moved in the same way as its more abrasive counterparts, but it does so more as a siren than a despot.

However they do it, Radiohead fans are conditioned to anticipate and absorb the shock with which the band's albums seem to be invariably and deliberately charged. When they listen for the first time, they listen actively; they prepare themselves for the moment when they will have to react to a colossal momentum shift by shifting to a new ear. In many ways, Radiohead's records have become forms of shock therapy; their listeners, or at least the ones that didn't peter off with OK Computer, want to be taught how to gape their throats wide enough to swallow unfamiliar types of music. They depend on that characteristic shift to facilitate their respective journeys into a new musical realm. When that shift never manifests, it's a shock--and a lesson--in itself.

To suggest that the state of popular music remains stagnant and rots until Radiohead takes a new direction may be exorbitant; but, in the most general sense, Radiohead disciples, as opposed to mere fans, who subscribe to the theory on the other side of the semicolon should be the only ones deeply affected one way or another by The King Of Limbs. The indifferent will remain indifferent, and the naysayers will have to rely on their old 'hipster techno shit' material. For the first time since The Bends, if not for the first time ever, Radiohead explores very little new territory with their new record. But the most dedicated of their fans, who expect to be helplessly blown to a different latitude by each new Radiohead record, might find themselves let down and hangin' around.

“Bloom” alloys signature moments from past Radiohead records: percussive bass akin to OK Computer’s “Airbag”; ethereal, beatless loops reminiscent of Kid A’s “Motion Picture Sountrack” and “Everything In Its Right Place,”; and the interplay between electronic and natural drums that defines In Rainbows. The second track “Morning Mr. Magpie” exposes a conspicuous void unique to The King Of Limbs; where definitive, often overbearing rhythm works to supplement and enhance powerful melody (and vice-versa) on each of Radiohead’s past albums, The King Of Limbs makes you choose. The first half, highlighted by the militant guitar march of “Magpie” and “Feral,” a collage of fragmented noise, is dominated by beat. The second half delivers the melodic mien that naturally follows In Rainbows.

The figurative Side Two is introduced by “Lotus Flower,” a less rhythmic cousin to “15-Step,” complete with off-time handclaps and a digitized bass track hell-bent on burrowing miles below Yorke’s vocal. For the first time on the album, Yorke uses his voice to communicate the melody and vitality of the song. Where it was merely exterior ornament on the beat-centric first half, the vocal melody is the unquestioned marrow of the second. Yorke reprises his muted trumpet act from “The National Anthem” in “Codex,” a sleepy, tactfully hollow track that is a horn-led bridge ahead of an In Rainbows B-side. Whether that parallel beckons complimentary or pejorative connotations, “Codex” makes the most of the understated theme that pervades the album; comprised of a lone kick drum for percussion, three earthy piano chords, and the familiar loop salad of piano, strings, and bells, the track offers nothing Radiohead fans haven’t been listening to for years.

Similarly, “Give Up The Ghost,” a standout track on an album of tracks that don’t stand out, holds up on little more than a kick drum and repetitive, unobtrusive acoustic guitar chords. Once again, a dampened Yorke voice gently dabs the guitars as it repeats an undecipherable blend of “Don’t love/hurt/haunt me” to define but not dominate the album’s penultimate track.

And only when you accept the innocence of The King Of Limbs can you adequately appreciate it. Nearly every piece of Radiohead’s back-catalogue has been at least manipulative, if not downright Machiavellian, in its way of forcing the listener to adapt to the deliberately cacophonous soundscapes. The King Of Limbs doesn’t do the work for you; for the first time, you have to figure out why you like it, because no track on the album has the Radioheadish arrogance to convince you that it’s great before you even make up your mind.

Just as you’ve begun to ponder The King Of Limbs’s standing in Radiohead lore, “Separator” challenges the finality of the album and, more importantly, Radiohead’s intention of imitating the LP format that has, in theory, been obsolete since roughly the turn of the millennium. A mid-tempo tune held up by lumpy bass, lightly topped drums, apparition-like vocals and little else, the eighth and final track lacks the resolution of “The Tourist,” “Motion Picture Soundtrack,” or “Videotape”; while those songs resolve any anomalies on their respective albums, “Separator” epitomizes them. Like the rest of the album, you have to ask yourself, rather than be told, why you like it. And relative to its preceding seven tracks, “Separator” might be most likely to illicit the answer, “Oh yeah…because it sounds good.”

Once either contentment or indifference, depending on your opinion of the album, buries the 13 paragraphs’ worth of questions, one remains unanswered and, perhaps, unanswerable: Is The King Of Limbs, by definition, an album? The eight tracks run too short to score an episode of Entourage, and “Separator” seems more like a mid-album highlight, a “Karma Police” or “All I Need,” if you will, than a closer. Has Radiohead stealthily baked a frustrated, angsty statement into the format, instead of the music as they usually do?

In typical Thom Yorke fashion, the frontman, with support from his bandmates, has publicly renounced the traditional album format, calling it “a real drag” and proclaiming Radiohead’s plans to make In Rainbows the last full-length LP in their catalogue. In typical Radiohead fan fashion, we all clutched the quote and plunged into the deep end hoping it would float. However, aside from “Separator’s” lack of finite quality, and although it seems to hint toward more music (because of the way it sounds, beginning-to-middle-to-end, not because Yorke sings “If you think this is over, then you’re wrong”—that’s too damn easy), The King Of Limbs adheres more closely to the traditional LP format than any Radiohead album since OK Computer. Although vinyl copies have not hit the market yet, there is a clear and observably deliberate division between Side One (“Bloom” through “Feral”) and Side Two (“Lotus Flower” through “Separator”). And although neither “Feral” nor “Separator” take a firm stance on the tracks that precede them, both embody and capitalize on the motifs and characteristics that pervade their respective sides.

There is a theory among the innest of Radiohead fans that states the box set will bring a second part of the album; that, indeed, The King Of Limbs as we know it right now is not a complete project. If that theory holds any weight, the album, with its lack of new tricks or unexpected treats, should drop it quickly. It’s more feasible to view The King Of Limbs as an update rather than a finite product with a concrete beginning and end. It’s Radiohead’s way of demystifying the album cycle and process, their way of saying ‘We grow and change between albums the same way anyone grows and changes in a two- or three-year span. Here’s some music we happened to make during that time. Don’t kill yourself over it.’ Unfortunately for Radiohead, a large population of their fans need to be mystified to enjoy the music. As if they care. There would be no mystery if they did.