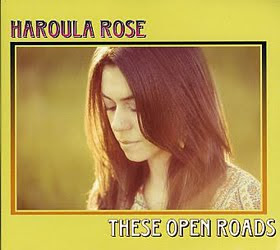 Haroula Rose has got some serious slow paced girly folk going on, most easily described as Taylor Swift without the pop influence. To speak generally, I think These Open Roads just kind of sounds like the overflow of broken hearted creativity from a girl who just got broken up with a few months ago… and for some reason can’t help but constantly talk about her ex-boyfriend/break up to all of her friends. On the other hand, my favorite part of this album is easily the pedal steel, whining behind her acoustic guitar and calm girl vocals. The overall sound of the album pulls back to the folk revival of yesteryear pretty successfully, just an earnest girl who hasn't cut her hair in a few years bearing her broken heart with a guitar. The two songs I chose “Duluth” and “An Other Break Up Ballad” are successful due to the constant presence of snare drum. In my opinion, the songs that don’t make a point of incorporating the drums fall flat and leave something to be desired. That said, if I ever get broken up with, you better bet I’m poppin’ this bad boy in and crying in my shower with the lights off.
Recommended tracks: 2 (An Other Breakup Ballad) & 4 (Duluth)
Posted by: Molly Young