The Curious Mystery - We Creeling 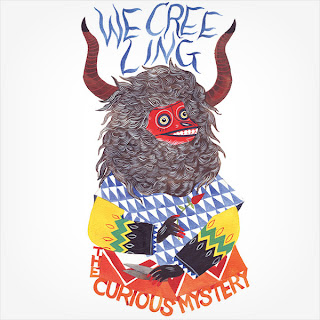 Lately I’ve been embarrassingly into reverb-y mixed down vocals (this might have to do with the fact I generally can't stand the vocals that have been coming out and it's just easier to ignore that way) and as a result I can’t help but really dig a bunch of what We Creeling’s got to offer. The Curious Mystery has a ton of 1960s/1970s influences and has this strong pull back to psych rock pulled off in a way I haven’t heard quite yet. At times it reminds me an awful lot of Jefferson Airplane with their apparent female and male dynamic, sitar, and soul pulling foreground of trippy instrumentals. On the other hand, it’s clear that these guys are a brooding bunch, and as far as I can tell, are kind of going for a some sort of modern spin on the Velvet Underground… a hard task, but they do pretty damn well for themselves. However sadly the guy in the band doesn’t sound nearly as cool as Lou Reed, and as a general rule I can’t stand Nicolas Gonzalez’s vocals. And because he’s got that trying-too-hard-to-seem-like-i-don’t-care indie jaded drawl which I’m just so sick of, instead of Lou’s effortless off handed semi-conversation (an unquiestionably difficult thin line to tread), I can’t stand any of the songs that he is prominently featured on... except "Blue Limits", that's a fuckn sweet song (i'm a serious sucker for that twangy guitar). However to contrast that, I really love the female voice from Shana Cleveland and pretty much all of the songs where she takes the lead. Some of those are “Early In The Morning”, “Night Ride Reeling”, and “From The Garden”.
Posted by: Molly Young