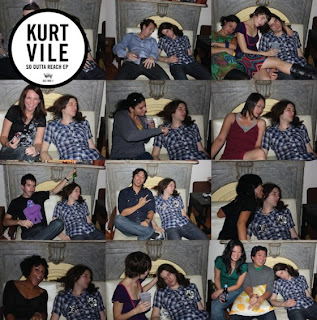 Kurt Vile's So Outta Reach EP is a gloomy yet dreamy release full of fingerpicking, wavering vocals, and repeated phrases. Vile doesn’t take any chances on this one as its sound is in the same folky, moody vein as his past albums, but the dependability is appreciated.
The EP opens with “The Creature”, where Vile showcases his guitar skills and lets his sultry, freakish vocals saunter over the delicate, scintillating notes.

The title sets the mood for the entire EP as all four songs carry heavy undertones of regret, detachment, and longing. On the final track, “(so outta reach)”, Vile laments “I wanna be a boy, I don’t wanna be a man,” repeatedly. Despite the morose lyrics, the track is calming and more upbeat than some of his other songs because it keeps a nice pace, keeping it light.
The closing lyrics about trying to his live his life twice suggest hopefulness despite his childhood is “out of reach”.
“Life’s a Beach” is a more fleshed out version of “(so outta reach)”, using the same lyrics but adding more instruments for a fuller sound. It seems that Vile wrote about two pages of lyrics for this EP and found ways to include them all in every song. The repetition doesn’t weaken the album however, as each song stands on its own.
Fans of Vile won’t be disappointed with this EP since it’s so in sync with his past releases. Real Estate fans will appreciate its pastoral, soothing vibe, and Devendra enthusiasts will connect with his dark, bizarre vocals.
Posted by: Siobhan Nichol Robinson