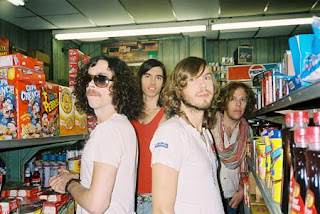 Boston's Orpheum Theatre, a mass expanse of cramped seats held together by big name acts and their most recent paint job, is hardly the easiest place to pull concert-goers out of their chairs, but Free Energy hardly let them sit down, pulling out all the stops in their opening slot. Having headlined medium sized venues and cropping up in a slew of festivals, Free Energy was more than qualified in jumping on tour with a seasoned, big-name veteran. Thus, Weezer's Memories tour seems to be the perfect slot. Here I had wondered how Free Energy would fair, thinking it implausible that any band could capture the attention of the room's ripening 90’s alternative rockers, newly collegiate hipsters, and the parents with kids not yet conceived by Pinkerton's, well, conception. However, with Free Energy's energetic stage presence and an upbeat pop-rock aesthetic, even the most jaded of the original Pinkerton conosurs found themselves bopping along one song deep.
This being their second night confronting Weezer ultra-fans, Free Energy saddled in again and proved their ability to entertain. Drawing from their latest album, Stuck on Nothing, songs like "Bad Stuff," "Bang Pop" and "Hope Child," they received a standing applause from a deservedly pumped up crowd.

With all the jazzy talk about internet radio and its evolmutaion, Mariella showed me 8tracks.com. I think its neat and entertainingly time consuming. WECB is internet radio!


This is a mix I made about an hour ago. This may only be of interest to insomniacs. Ah well.

Posted by: Unknown No comments:

Email ThisBlogThis!Share to TwitterShare to FacebookShare to Pinterest
Labels: mix 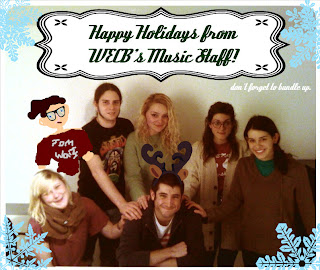 Email ThisBlogThis!Share to TwitterShare to FacebookShare to Pinterest
Labels: WECB 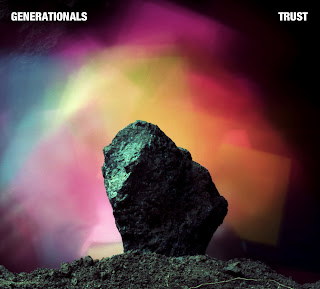 The only phrase I can come up with to describe The Generationals Trust EP is “high energy boredom”. Throughout it’s entirety both the male and female vocals sound ja-ja-ja-jaded which in many cases I would consider a deal breaker; However in contrast to the mildly dynamic fast paced instrumentals it works. The music itself is a blend of analog and synth… something I have a definite weak spot for. Not to mention how welcomed hearing some Hi-Fi produced surf guitar was for a change (on track 4 “Trust”). Overall I’d describe it as a mixture of The Unicorns, Vampire Weekend, Eux Autres, and Why?.

One thing is for sure, this entire EP is damn catchy, I recommend it to anyone who really needs something easy and new to listen to.

Posted by: Molly Young No comments:

Psychic Temple is mood music for people who don’t want to be told how to feel. Schlarb chips his brand of whispy, ambient rock off the all-too-easy-to-replicate post-rock block. The key to his saving distinction is prominent percussion; the drums writhe on the cold floor while the guitars melt into memory foam for what seems like eight hours (but is actually about ten minutes) of confused limbo. The 4-song, 33-minute album can be your best friend during finals; the cloudy keys and slippery guitars are calming enough to lull you away from Bubble Spinner, but the drums jar you awake and back to your half-done study guide whenever you start to drift off. The songs are extravagantly long and experience very little structural variation, but the dynamics and artful discrepancies make this album worth dragging into your library for a few listens in December (and again in May).

Posted by: Mike Flanagan No comments:

Seeing Warpaint live at the Great Scott made such a lasting impression on me that I’ve been listening to their songs on a repeat mode ever since that night. The band, composed of four girls, has such a overpowering presence and massive sound that you can’t help but be impressed. Their overall sound is dark and even sinister yet balanced with beautiful dreamy vocals. Their distorted guitars sound like synthesizers and their hi-fi vocals with extreme delay create an ambiance of uncanny dreams. The girls go from low-almost whispered vocals to climaxes in which they scream their lungs out. The vocals are drenched in reverb and delay, which becomes a vital aspect to the surrealism of their songs. In “Stars”, Emily Kokal leads the vocals with a soft delay that fades out into the music, guitarist Theresa Wayman accompanies this with subtle background vocals that give a completely ominous sound to the song.
“Elephants” opens with an electrifying guitar strumming that gets integrated with the vocal chant: “I'll break your heart, to keep you far from where, all dangers start”. The song then gets much more intense as the drums come in and the guitars start jamming dissonant chords. Their climaxing instrumental jams reminded me of Radiohead’s explosions. Each song would initiate with a dissonant melody and then transition into crazy alternative riffs that would literally burst out out of nowhere.
The most expected song was “Beetles”, which was greeted with claps and cheering. In this song, Wayman sings a fast-paced harsh vocal introduction that make you want to dance and go crazy. This then transitions into a slow surreal vocal section with an ambient feel.
As they play, each member is in her own zone, with eyes shut and moving their body to the music. Bassist Jenny Lee Lindberg is literally in another world while she plays, rocking her body in a slow motion and shaking her head to the beat. The girls have such an amazing presence. It seems like they don’t even care how they look (even though they are insanely hot). With their baggy clothes, messy hair, and their bodies dancing all over the place, they just play and enjoy their music.

Posted by: Lorena Alvarado No comments:

I asked each member of WECB's music staff to make a list of their top ten musical releases of 2010. We have 25 days left of the year, so these are pending. I wanted to post them anyway to kick start the fun of composing and refining a super list of 2010's best new music. And let me tell you, on the list of the best ways to have fun, making them is number 1.
Oh! and top 2010 pics of the staff are pending as well.
Mariella 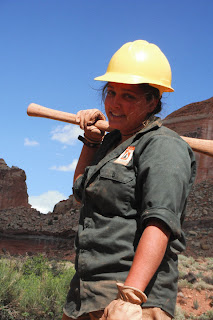 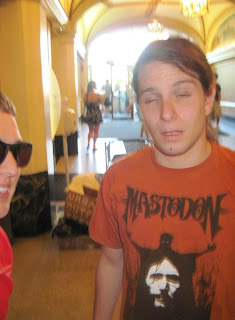 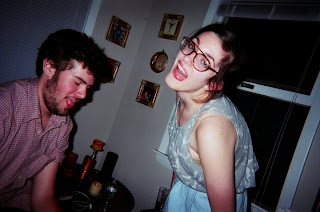 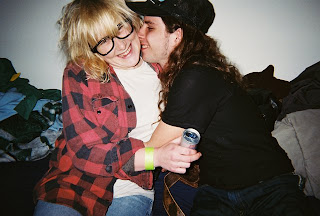 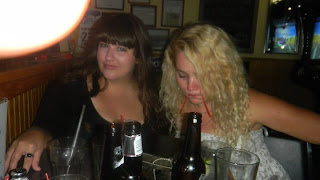 Posted by: Music Department No comments:

On Sunday November 21st I found myself smoking a cigarette outside of The Midway Café in Jamaica Plains. It was a cold night, I was with my buddy and bosslady Margaret. We had come out this way to interview a musician, Viva, who had sent our music staff her album Rock and Roll Lover. The album was fun and I was excited to see what my first interview with a real live musician was going to be like.
We finished our cigarettes and walked into the bar. There we were greeted by a classic New England-type bartender. I promptly headed to the bathroom leaving Margaret with the ridiculously awkward task of trying to explain that we were with a band that hadn’t even arrived yet so that we could interview them. By the time I returned to the bar, Surly Dave (he was surly and he told us that was his name) was grilling Margaret about who we were here with and what we were supposed to be doing. After maybe five minutes of awkwardly tense discussion, it came out that WECB is an Emerson-affiliated program. The change in Surly Dave’s demeanor was instantaneous. He treated us like old friends and his wind-weathered New England face cracked in two with an enormous smile. All in all, he was a great dude and his jokes are worth a million bucks.
We were told that Viva hadn’t arrived yet so a quick analysis of the situation proved that another cigarette should be had. While we were outside, a blonde woman stepped out of a van parked in front of us. Quick deduction on Margaret’s part and a tentative “aaaaare you Viva?” yielded wonderful results and suddenly we were all pals.
Viva herself is a really outgoing lady. It was obvious right off the bat that she was just as excited to be interviewed as we were to interview her. Not wanting to get in her way, Margaret and I headed back inside to wait out the show set up. Soon enough, the show was about to get started.
On the album, Viva is accompanied by a seven-piece band of brass, bass, and drums. However, tonight was to be a special “duo performance” of Viva and her bassist Mary “Freakin” Feaster. They started their set with a rousing performance of “Someone Else,” dedicated to Surly Dave, who had also helped set up the equipment. The energy from the two people onstage was great. For a band with no room to move around in, playing to an audience of maybe four, they were rocking the place. The song sounded great in its stripped down form and Viva’s vocals went miles beyond how she sounds recorded.
People began heading into the bar mainly during the first three songs. Included in those three were “What’s Your Sign, Baby?” a quirky ditty about getting to know someone new, and “Universal Radio,” which Viva dedicated to us. I gotta say, that was a first for me and it felt pretty good. By the time the song had finished, the bar was reasonably full and everyone was digging the band.
The good times continued with a great Bowie cover of “Moonage Daydream,” however their lack of a drummer was starting to prove difficult (Viva later informed us that the drummer had a prior gig that he couldn’t get out of, and props to her for doing the show without him.).  Not wanting to lose all the energy she had built up, Viva called out to this kid Joe in the audience. Now Joe looks like a pretty average guy. Couldn’t have been older than 18. But he gave a bored smiled and hopped onto the drum set like he had been playing his whole life. Viva asked if he could do a disco beat and almost before he had said yes, she had started into “Go-Go Boots.” Here, the drums stole the show. How could they not, after seeing this random kid just get onstage. Obviously he was a drummer from one of the other bands playing that night but still, he didn’t know Viva, he was just playing by feeling. It was fucking cool. The song was great, the vibes were great, the crowd was lovin’ it. Now it was Viva’s show again.
The last song of the night was the title track of her album. Once again, Joe sat in on drums and played fantastically. The song was more difficult to play, with calculated stops in the drumming, and Joe pulled it off like a champ. He had purple-haired girls dancing their asses off. Viva was jumping around in the like three inches of space she had, and Mary Feaster was the archetypal bassist, eyes closed into slits, head grooving so hard it might fall off.
And like that, it was over. Everyone applauded Joe for his badassery, Viva jumped offstage, and Margaret and I decided it was cigarette o’clock while we waited for things to wind down. (our Q&A with Viva will be posted soon!) -Ben Danger
Posted by: Music Department No comments: