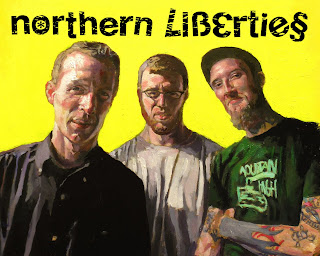 There was a show. My pals and I caught Northern Liberties perform the last set of the night. The lead vocalist, his name is Justin, wore a white collar sky-blue dress, but who gives a shit? With his attachable drumline, he rhythmically jousted his bandmate Marc on drumset. Kevin's sludgy bass vibrated along and into varied outlets of distortion pedals. Their sound was the hazy gaze of garage, the heartbeat of a diabetic candidate, and the sweat of a punk all blended into ear-juice that made people want to shake their bodies. And if NoLibs were spilling into Allston territory, our rats would be shaken too.

Listen to: Children of the Unholy Cross