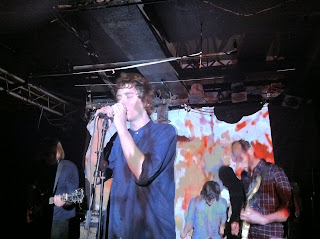 Ever wondered what it would sound like if Ian Curtis escaped the dreary grayness of Manchester and spent a weekend in southern California? Probably not, but it would sound just like Crystal Stilts. The Brooklyn quartet channels Joy Division’s melancholia but on top of the gloom is a glittering, thick layer of beachy sunshine, and they graced Boston with their presence Tuesday night at Great Scott.

For some bizarre reason, there were three opening bands on a weeknight. My boyfriend and I caught half of Girlfriends’ set and were thoroughly unimpressed, so while the next band took the stage we sought refuge from the PBR-drenched bar and got some coffee. Thankfully we returned just in time to catch CS, who all looked like bizarre, somewhat drugged-out estranged uncles who drop in plastered at a family reunion. So, they were pretty cool.

They started their set with the first two tracks of their latest album, In Love with Oblivion. “Sycamore Tree” captures the menacing charm of Curtis’ vocals and pairs it with dancey, surfy bass, and “Through the Floor” is very much in the same vein, but with some added hand claps.

All in all, we left totally satisfied (although we walked home drenched by the rain). CS knew exactly what to play, the only negative of the night was that they didn’t come on until midnight, way past my bedtime. 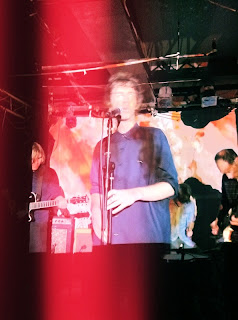