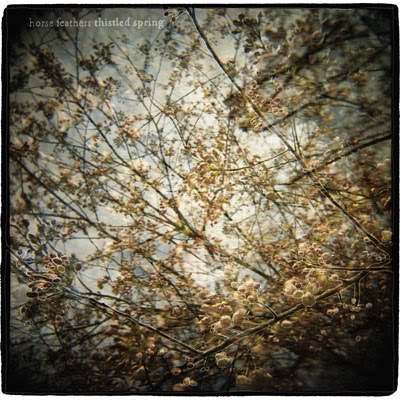 Sometimes I wish I was born into the setting of Where the Red Fern Grows or Shiloh just so I could move to Boston and let Horse Feathers serenade me into daydreams about my childhood in the country. With Thistled Spring, the Justin Ringle solo project-turned-duo-turned-trio-turned-quartet somehow manages to create something even more eloquently picturesque than 2007’s masterful House With No Home without changing a thing.

Horse Feathers sticks out of the beardy-folk cliché like a sore thumb because of its prominent string section. The cello and violin players are as much full-time members of the band as is frontman/songwriter Ringle, so the string melodies serve to offset and compliment the vocals and guitar rather than to simply provide a backdrop. As Ringle’s wispy voice croons like a gust of wind, the strings, as literally as a metaphor can possibly describe, paint sunset-kissed hills and swaying cattails on a canvas of woody guitars and subtle, tasteful percussion.

And Ringle is so preposterously adept at setting scenes with his songwriting that he should be giving Sam Beam and Justin Vernon lessons. He writes in such a way that the lyrics don’t cut through the music but compliment it; the words are not the focus of the music but a point of reference to direct the listener’s Horse Feathers-induced daydream to a certain place in his or her past. Without even paying attention to the lyrics, “As a Ghost” could transport you back seven years to the top of the hill where you had your first real kiss, while “Belly of June” could be something as simple yet so satisfying as a warm gust of summer air from your open bedroom window as you sleep.

Thistled Spring is a perfect album to end a satisfying hard day’s work as you drift off to sleep. It’s equally fulfilling to listen closely and pick up a few beautiful pointers about flawless songwriting. It does what few albums have been able to do successfully in the past decade or so: remain sonically pleasing without sacrificing originality or freshness.

4.5/5
Watch the video for "Curs in the Weeds" off Horse Feathers' last album, House With No Home, and be sure to pick up Thistled Spring.
Thistled Spring is out today (4/20) on Kill Rock Stars.
Posted by: Mike Flanagan