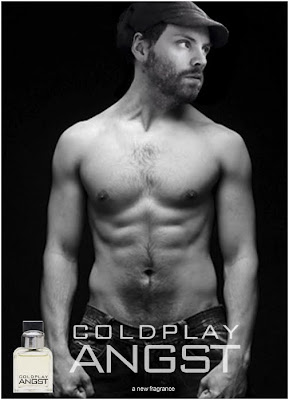 Coldplay released their very first exclusive fragrance for men today: Coldplay Angst. You can get all the info on how to order it and whatnot here.

The page reads just like an Onion article, only completely, painfully, and palpably serious and self-aware:

We’re very pleased to announce that Coldplay have today launched their own exclusive fragrance, Angst by Coldplay.


“This is something we’ve wanted to do for a long time,” said the band’s frontman, Chris Martin. “People like to smell nice and we thought we could help them out.”

Martin was quick to point out that there are bigger and better scents available, but that the band are simply trying to make the best aroma they can, for their own pleasure. “If anyone else likes it,” he explained, “then that’s a bonus”.

The core ingredients of the scent are listed on the Brian Eno-designed bottles as sangre, sudor and lágrimas, all of which have been sourced from Fairtrade suppliers.

Angst by Coldplay is available from today, April 1st, in the Coldplay official store, priced at £42. Click here to order your bottle now.

The model in the picture is Coldplay guitarist Jonny Buckland. Chris Martin’s abs aren’t quite toned enough to sell cologne to dudes, apparently.

…And by the time I finished writing this, I realized the probability that this has something to do with today’s date. Oh well…well played. I'm a little ashamed it took me the five minutes it took to write this to figure it out.
Posted by: Mike Flanagan