Surfer Blood is on the road promoting their debut LP, Astro Coast and touring with them is Turbo Fruits, a surf rock band from the landlocked state of Tennessee. Doomstar, a local Boston band, warmed up the crowd for the bands at Tuesday night’s sold out Great Scott show earlier this month.
The cold Boston crowd, eager for any sign of summer, warmly welcomed Surfer Blood and their island/surf rock sound. The array of instruments on stage and the light-hearted lyrics kept everyone cheery and entertained. Fans were singing along and the good vibes (and beer) were flowing.
But Turbo Fruits nearly stole the show. The band’s classic combination of bass, guitar, and drums had the crowd jumpin’ and jivin’ all the way through. The trio’s high-energy set included highlights such as a cover of Creedence Clearwater Revival’s “Bad Moon Rising,” and their seven-inch, “Colt 45.” 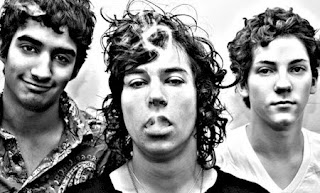 Overall, the bands brought to Boston a much needed hint of spring. The surf rock show reminded the audience that there’s more to life than winter. Spring is upon us and summer is just around the corner! So start packing up your winter clothes and while you’re at it, check out Turbo Fruits.
Posted by: Mars