Grammy Reactions Revised (But Not Rescinded) 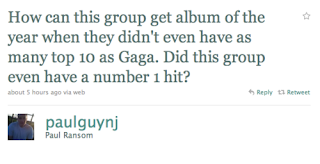 I still stand by what I said about the Grammys, particularly Arcade Fire. This hilarious blog, however, has influenced me to look at things a bit differently.
I didn't realize what a huge outrage Arcade Fire's victory was in the non-Emersonian community. I didn't think anybody cared that much (we all know the VMA's are the true measure of a musician's validity and success, after all). Regardless, though, the Alkaline Trio-loving Grammy board decided Arcade Fire, who also won the Stupid Name Award earlier that night, had written an album more substantial than Lady Gaga's or Eminem's. And for all the furious Em fans who spent four hours watching the circus just to see a bunch of hippies play rock music, which has not been cool since the 80s, there was a relatively small (but actually pretty gigantic) handful of pseudo- and semi-hipsters who didn't watch the show at all but carefully monitored live tweets in front of their turned-off televisions all night.
As I said before, I didn't watch much of the show, and I don't think Arcade Fire (or is it The Suburbs?) deserved the Best Album award. Having said that, I think it was more deserving than the others. Here are my problems real with the Grammys:
Inconsistency. Why did they chose to start this 'indie' revolution in 2011? Is it because the outward style Arcade Fire seems to represent to them has reached a pretty unprecedented level of popularity in the mainstream? That's a legitimate question, not rhetorical, not an assertion. As I said before, I am not, and have never been, an Arcade Fire fan. But in talking to fans, whose opinions I respect despite what my somewhat jocular previous post might have suggested, Funeral is their real masterpiece. If this is supposed to be the biggest music award show in the country and a barometer of the best music of a given year, why can't they find a panel of experts that knew of Arcade Fire back in 2004?
It seems as though they are atoning for missing decades and decades of great music that didn't get much radio play. And it's coming conveniently at the same time that, again, as I quipped before, Arcade Fire can suitably share a breath with artists like Paramore and Kesha. So, I suppose, this is the root of the problem that validates the gripes on either side of the Arcade Fire mystery: a Grammy award is meaningless because the Grammys are a business, just like anything else.
They'll never award records that are actually, substantially great because no one would watch their annual award show. Let's say the Album of the Year nominees included, say, The Tallest Man On Earth, Charles Bradley, Mavis Staples, Punch Brothers, and Colour Revolt (some of my favorite albums of the year, just for example). Of the tiny demographic that would actually be interested in which of these bands, according to the Grammy panel, recorded the superior album, a large portion would be too cool and stylishly apathetic to watch anyway.
But Arcade Fire is a perfect middle-ground; they're safe enough to appease a portion of their mainstream audience, 'indie' enough to impress even the hippest second-semester freshmen at private arts-oriented schools (cough cough...), and just a tiny bit rebellious so as to incline the Lady Gagified nation to take their outrage to Twitter -- a built-in publicity machine.
So please don't be mislead by my last post -- I don't hate Arcade Fire and I wouldn't immediately dismiss someone who is a fan of The Suburbs. I just, joking aside, refuse to jump ship and legitimize this Grammy award any more than I would if Gaga, Eminem, or whoever the fuck else was nominated had won. It's a goddamn business, just like anything else, and this sudden recognition of non-mainstream music is no more than a calculated business move.
Posted by: Mike Flanagan