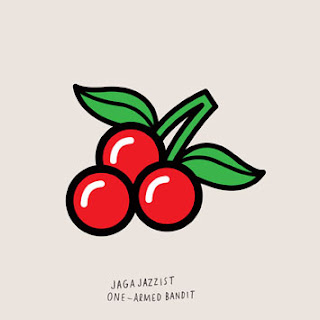 It isn’t very often that one finds a band with such a unique sound as that of Jaga Jazzist. Hailing from Norway, this nine-member strong ensemble, headed by brothers Martin and Lars Horntveth, is one of the most promising groups of the nu-jazz genre. Combining driving drums, jazzy brass accents, and distinctive synth-based melodies, their newest studio album One-Armed Bandit is a short and sweet eclectic treat.

Clocking in at under an hour, One-Armed Bandit’s tracks are grand in scope, ambitiously arranged, and never lackluster. The introductory track The Thing Introduces… is like a whirling time portal of brassy persistence and crashing drums. The subsequent songs can only be described as an odyssey of trippy, and sometimes intergalactic synthesizers partying with the garish “wonk” of trumpets, trombones, and tubas. Standout tracks include One-Armed Bandit, which reminds one of a jaunt through the crazy venues and vistas in Las Vegas, the epic and adventurous Toccata, and the 1970’s car chase in space, Prognissekongen.

Part sprawling science-fiction epic, part jazzy video game soundtrack, and an auditory adventure all the way through, One-Armed Bandit is one trip you can experience without the need of psychedelics.

Jaga Jazzist will be touring Europe in February and have no U.S. tour dates planned as of yet.