Rego - From The Royal Arcade 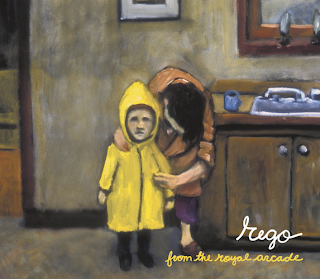 Following her successful self-released EP Learning To Be Lonely, Rebecca Rego’s From The Royal Arcade continues to display her distinct, sultry voice and knack for nostalgic, homegrown lyrics. The music itself consists of Rego’s acoustic guitar dancing with quiet piano support and twangy electric guitar evoking a wistful southern charm. Don’t be mistaken: Rego’s strong voice (which ranges from that of a young girl full of wonder to a mature vixenish woman) takes center stage as she sings about growing up, lessons learned, and life in general. It’s hard not to fall under her charm on bouncy songs like “Caterpillars” and “Dye Your Hair Red” and the amorous “After The War” and “Gave Me”. If you’ve ever been vaguely interested in country music, Rego’s From The Royal Arcade is an accessible and highly enjoyable folksy listen.

"Astronauts" off of From The Royal Arcade