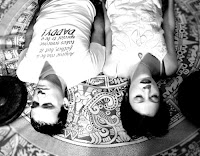 To begin, Xiu Xiu was one of my favorite bands for almost all of my high school years, when we got their new CD Dear God I Hate Myself I forced the music staff to add it even though I had never listened to it (despite the awful review from Sasha Prell), and immediately requested tickets to this concert. When they took the stage I was horrified to find that: the powerful screaming from Jamie Stewart had turned to wining, which i found just as irritating as reading Hamlet's complaining CHEER UP ASSHOLE! and the playful found instruments which had defined their older sound had gone, being replaced by synth, symbols, and noise. 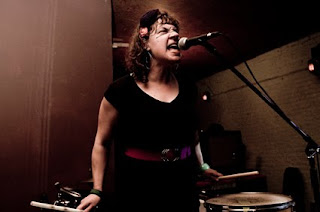 But the concert was not an total downer and waste of time. All of this negativity is in comparison to the two awesome female fronted opening bands Twin Sister and Tune Yards. Twin Sister is a band that goes along with the dynamic of those dreamy and airy female fronted bands like Jenny Lewis or She and Him that so many of us love. The guitar has that Johnny Marr twang to it from The Smiths that just revs my engine, but unlike my favorite shoegaze band they add in some deep driving bass and a lot of xylophone. After the show I flipped through my iPod to find that Twin Sister already had a home there, with one of my fave singles from 2009 "Ginger", a song about ginger kids and how dangerously devious they are.
However the Tune Yards were what really blew my mind live. At first listen they don't sound as special as they are, but no one can deny the awesomeness of a Reggae vocalist with breasts. It took me a number of songs to understand how they play live but here is the rundown. The band is made up of two people, Merril Garbus on vocals/drum and Nate Brenner on bass. At the beginning of every song she records layers of drum and crazy vocal sounds to make a beat and then loops it and plays over it. It doesn't sound like much on paper... but live it is just insane.
Check out Twin Sister & Tune Yards on myspace.com:
Twin Sister: http://www.myspace.com/twinsisterband
Tune Yards: http://www.myspace.com/tuneyards
Posted by: Molly Young