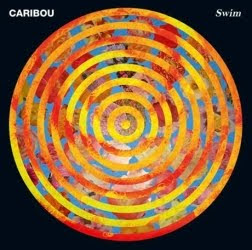 After hearing the first track "Odessa" off Caribous latest LP, a smooth and eclectic dance track, I jumped at the opportunity to review it (as the lone resident electro lover this often happens). But sadly, sometimes the first track on an album is the best that it's gonna get, and Swim definitely falls within that tragic mold. While this album manages to have a really unique collages of samples through it, almost every other song never builds to any sort of climax (and really why do dance music if you aren't making people dance). However, if you removed every other song from the LP you would be left with a pretty killer EP.
As a rule, the entire album's vocals are auto-tuned... but just enough, and the reverb is just the right amount to soften up the already vanilla voice. "Odessa" (easily my fave track) has a badass layering of faux animal sounds, cymbals, cowbell, and a New Order type bell. "Kaili", the third song on the album is the most traditional dance song on the album, using a pretty basic beat... but to make it less played out there is a mixture of crazy trumpet noises that were probably found in a post LSD Beatles album (AWESOME, ammirite?).
But, "Bowls" is what really caught my ear, a fucking dance song made using the resonant qualities in metal bowls. Although not all of the beats immediately fall into place, as the song continues it all comes together. Using looped samples of bowls, along with a synth shaker, some reverbed bass, harp, and a pretty awesome steel drum line Caribou managed to really impress me.
Although most of the songs drag out for much longer than I wanted to listen for I'd say that Swim is 100% worth a download and listen (if for no other reason then "Bowls", "Odessa", and "Kaili") 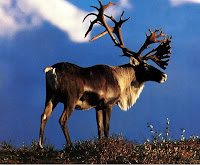 (a caribou... just because I all too often forget what bands are actually named after)
3/5
Posted by: Molly Young