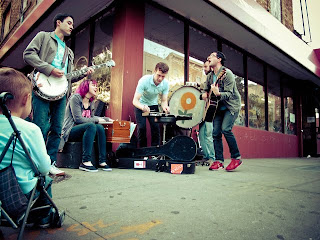 Last Thursday, Freelance Whales opened for the band Cymbals Eat Guitars in the Middle East in Cambridge. And to be honest, this opening band stole the show. They were incredibly charismatic and managed to transmit their passion to the crowd. It is truly great to still be able to hear a band that is amazing live in this modern music era, where many times I have been horrified to find that bands are actually fake studio engineered and can’t play a single note live. After seeing Freelance Whales I restored my faith in 21th century bands. They had a genuine energetic live sound. To top their performance, they closed their set with a cover of my personal favorite Broken Socials Scene’s 7/4 (Shoreline) which made the entire crowd go insane.
Posted by: Lorena Alvarado