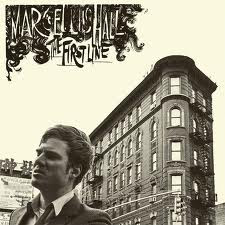 There’s a lot of “folk” going around these days, but Marcellus Hall’s new album, The First Line is some of the best. Hall is a sort of 21st century Bob Dylan- acoustic guitar, harmonica, minimal drums, a bit o’ organ, and storytelling lyrics. The biggest difference is in the vocals. Hall’s voice is just as strong and naked as Dylan’s, only it’s much more… palatable. If you like Dylan, or if you’re of the crowd that “would like him if only his voice wasn’t so ‘weird’,” check out “One Drop of Rain,” “Wishing My Heart Was Stone,” or “It’s My Life.” If you’re not hooked after one of those (especially “One Drop of Rain”), then this album probably isn’t for you.

Fun Fact: Hall is also an artist whose work has appeared in The New Yorker, and Time.