WECB's Lydia Liebman is hosting Mario Castro and his group for an in studio recording session today! 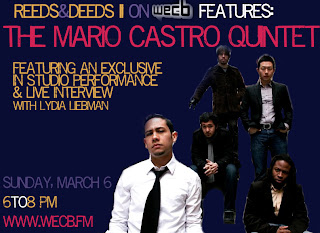 "Before Mario even discovered his passion for music he was a shy little boy who mysteriously loved to see his father perform and rehearse with his band.
Although it was his mother who took him to his first saxophone lesson, Mario Castro originally started playing music with the intentions of creating a better relationship with his father. He attended the famed Escuela Libre de Musica in Puerto Rico where they made him choose between playing saxophone or tuba…the choice was obvious! Even though all he knew about saxophone was Lisa Simpson, Mario quickly developed a certain interest for the instrument. Mario was enrolled in a great music school, but it is evident in his playing that his best education came from the streets where he grew up. He was lucky enough to be raised in a town where they were a lot of musicians guiding him through the right path. His father, one of the musicians he speaks of, is what he claims to be his biggest influence. He taught him how to balance the music theory he was learning at school with what really happens on stage.  Shortly after starting his new passion in life he was already using school lunch hours to go practice. Practicing hours and hours a day with incredible discipline and focus.
His first exposure to jazz was two years after he started taking lessons, when he first laid ears on Dexter Gordon’s huge and soulful sound. Since then Mario’s hours of practice duplicated and his goals became clearer. Mario got interested mostly in jazz and not far latter in his career he got the opportunity to perform in the Puerto Rico Heineken Jazz Festival with the Berklee in Puerto Rico student Big Band. His performance earned him a full scholarship to attend the 2005 five week program. Although Mario’s primary interested was jazz, that did not stop him from learning his Afro-Caribbean roots and how to play various styles of music. This attitude led him to perform with a great variety of artists and groups, so much that he started gaining allot of reputation among the veteran musicians in the Puerto Rican music scene. Mario played in Puerto Rico’s most important theaters and stages, performances including with the Puerto Rico Philharmonic Orchestra.
By the time Mario was 19 he decided he wanted to take his musicianship to the next level, which meant leaving his country to expand his knowledge. Today Mario attends Berklee College of Music where he has the honor of studying with, Jeff Stout, Greg Badolato, George Garzone, Tony Germain, Shanon Leclair, Greg Hopkins, Phil Wilson, Dave Santoro, between others."
Cherokee