Sufjan Stevens - The Age of Adz 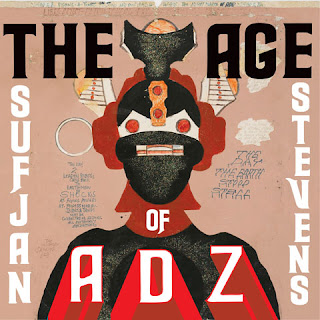 Before playing the first track of Sufjan Stevens’ new album, The Age of Adz, I was expecting a beautiful set of songs to reflect on nothing and everything at the same time. Yet when I played the first track, “Futile Devices”, I was surprised with what seemed to be a soundtrack for an intergalactic war. The song exploded with electronic sounds that bore no resemblance to Sufjan’s traditional soft melodies.

This album is definitely not one of his best. The songs are too electronic and synthesized. In many of the songs, his voice sounds extremely engineered, with an exaggerated reverb that only makes him sound robot-like. The vocals constantly clash with the beats; they don't compliment the music at all.

In my opinion, Sufjan is at his best with simply acoustic instruments and his voice. The electronica sound is not his forte. Non-the less, Sufjan is still an amazing musician and his album definitely has some great tracks. “Get Real, Get Right” is alive with electric violins that fill up the song. One of the tracks I enjoyed the most was “Vesuvius”, which starts with a basic piano melody, but then gets as electronic as the other tracks. I appreciate Sufjan’s effort to experiment with this album, but he should definitely throw out the synthesizer and go back to the banjo.