Mavis Staples- You Are Not Alone 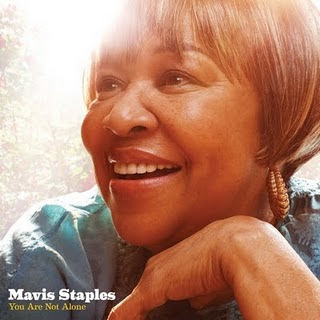 With Staples album You Are Not Alone the dialogue between the past and present is beyond clear. While Mavis’ beautifully bass-y classic voice is still intact in her 70th year, I found myself less than convinced that the clean and modern production value was compatible to her soulful sound (brought to you by Wilco’s Jeff Tweedy). This can be heard pretty clearly in “I Belong To The Band”, where although the song has ties back to the 1970s, the gospel style hand claps sound so compressed I’d make the mistake of thinking they were canned sounds and not made by people at all. (That is not to say that I don’t absolutely love this song).

Despite the unmistakable quality in tracks like “To Christ There Is No East Or West”, they never penetrate my taste due to the overwhelming presence of Jesus. Despite my love for gospel, I’m in it for the music… not the religion.

“Creep Along Moses” is the strongest track on the album. It is the perfect dichotomy of catchy and religious… a balance I’ve rarely heard struck. The drums mimic a train chugging along, and the guitar twangs sparingly above with gospel singers ‘creepn along’.

Tracks: Don’t Knock, You Are Not Alone, Creep Along Moses, I Belong To The Band, Last Train, Too Close/On My Way To Heaven