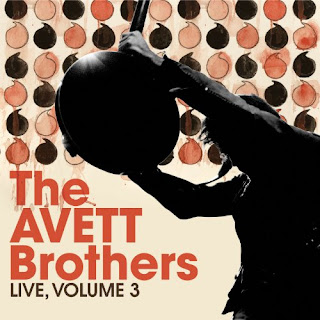 My first memory of listening to The Avett Brothers was back in '06. I heard them live at the Philadelphia Folk Festival. They were one of many acts on a big stage that night, and I was blown away. I saw them months later in a bumble-tumble town in PA, in a crowded church. I was floored.

I only had enough money bills to pay for their six song EP "The Gleam." I stuck with that recording as my A-Bro's fix for years.

My buddy Mars, a fellow music staffer, came back from this summer blasting a random assortment of their songs.. hearing them was like taking a long drag of an overdue cigarette, or taking a sip of an ice cold beer after a overworked day, except, listening to them doesn't imply that you "have a problem."

I have a point! And here it is: A cold beer and a cigarette are best when enjoyed outside, on a porch, in the sun. Same with the Avett Brothers. BUT if ya can't hold on to Summer forever (I'm WORKING ON IT) then get their live recordings. This one. It has "Colorshow", "Talk On Indolence", and "When I Drink", backed with a chorus of screaming folkies. It has unrestrained energy. It's swell.

Want a DIY Summer recipe? Grab a space heater, fan, and this record. Put them all on in the living room. Grab yourself a beer, and offer one to your roommate. That way, they can stop saying "you have a problem." (Mars I'm looking at you.)