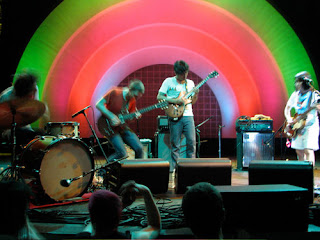 This past Sunday, Deerhoof performed a live show at the Paramount Theatre, hosted by Arts Emerson. After patiently waiting in the seats while the opening bands played, the crowd finally stood up in excitement as Deerhoof began their set. They started right away with a blast of sound that filled the room with energy. Their heavy amplified guitars and hectic drum beats made everyone’s heart pump franticly. With hard riffs and dynamic melody changes, their sound is simply unpredictable. During the entire show there was never a warning of what was to come, the band would pass from relatively soft melodies to explosions of sound. They had an amazing stage presence, which at times way extremely playful. During some songs they would break out into little dance choreographies that made the crowd go wild.

Each of the members seemed to be as eccentric as their music. The singer, Satomi Matsuzaki was one of the main highlights of the show. With her miniature size, she was constantly jumping to the music with the excitement of a cheerleader. It is hard to say whether she was singing in English or Japanese yet her nonsense lyrics and incomprehensible words are a vital to the originality of the band. In their popular song, “Panda, Panda, Panda” the only understandable words are “Panda” and “China”. The other members of the band are just as charismatic as Matsuzaki. During the show someone screamed to guitarist Ed Rodriguez that they liked his shoes. He responded by giving the crowd a small tap dance. In between songs, the drummer Greg Saunier gave little nonsense speeches, which felt like witnessing a tea party with the Mad Hatter. Overall the experience of listening to Deerhoof live was as intense as Wonderland.