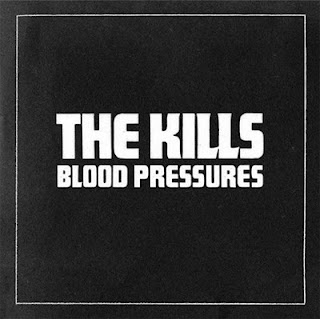 It’s been three years since The Kills last cut a record. With Allison Mosshart moonlighting as the she-wolf front woman of Jack White’s blues-rock outfit The Dead Weather, and Jamie Hince only making headlines for dating supermodeltrainwreck Kate Moss, it was anybodies’ guess as to what The Kills’ fourth studio album would sound like. Since their bare-bones garage style debuted in 2003 with Keep On Your Mean Side, The Kills have steadily cultivated their sound, making true believers of fans with 2005’s No Wow, and riding that success to a new high-water mark with Midnight Boom (2008).

Now devotees can breathe a sigh of relief, because ‘VV’ (Mosshart) and ‘Hotel’ (Hince) have lost none of their black magic chemistry during the off-time. Blood Pressures picks up all the familiar pieces of The Kills’ style- pre-programmed beats, and stuttering guitar rhythms entwined in Mosshart’s raspy chameleon vocals- and blasts off, coming across as bigger, sharper, and more complex.


The eleven tracks come at you at a variety of different paces. ‘Future Starts Slow’ illustrates how good The Kills are at creating rhythms that feel like they’re advancing towards you step by step, with Mosshart in lead vocals coming across as a controlled, echoing howl and Hince playing the role of supporting ghost, his voice filtering in around the edges. The song sets the tone of a gonzo love/hate affair that pervades the entirety of the album before rolling into the giga-crunched whine of ‘Satellite’. Chanting spaced-out pleas of reconnection to cut phone lines over the slow turning reggae rise and fall melody, the song makes excellent use of the spectral moans supplied by the REV Gospel Choir, as well as the cadence of the song ‘Fisherman’ by old-time 70’s Jamaican group The Congos. With the absence of any other band members, Hince and Mosshart are methodical, diligent, and hands-on about constructing their music from unique and interesting components, and the result is the shifting colors that surge through Blood Pressures over its 42 minute runtime.

‘Heart Is a Beating Drum’ showcases the album’s first real high point. Employing the empty boot-stomping sounds that peppered Midnight Boom, the unleashed expertise of Hince at crafting licks and beats for VV’s voice to launch off, and by pounding the mantra of the song title into a hive of digital beeps, clapping hands, quick stutter-sound effects, and one brief but glorious cut-loose shred session, the song comes off as both an inescapable warning and a call to arms, with Mosshart invoking the hungry give-all-or-nothing passion she embodies so well: ‘Send your love on a rampage/Give her everything you’ve got/And when you come to hate her/Show her more than just a spark…’ The Kills use this theme of extreme give and take to mark their sly turns of phrase with a dirty inevitability that draws you closer in, rather than turn you away. Hince and Mosshart welcome and relish it, and it drives the coy fatalism of ‘Nail In My Coffin’, a track that reverberates with the sound and feel of the fast 80’s. Quick and raw, the guitar lizard-slides along to upbeat ‘Oh oh oh’s’ and punctuating the pointed rat-a-tat growl of Mosshart’s emphasis on the word ‘coffin’.

The album comes to a sudden halt however with Hince’s first ever solo track ‘Wild Charms’. Crooning a dreamy, slow-cowboy sigh that lasts a fleeting 1:14, this short interlude is lyrically and emotionally strong for its brevity, wistfully recalling ‘She who played concertos foul and black/Upon my heartstrings and never looked back’, and balances out Mosshart’s own solo ballad three tracks later on ‘The Last Goodbye’, that finds her channeling Patsy Cline on a straightforward song of heartbreak and regret that listens like a slow carousel waltz trapped on a skipping record. Being able to hear Hince and Mosshart draw their breath after each line to prepare for the next lends the two ballads a subtle emotional weight that makes them come off as something more than just corn syrup-y sweet.

The emotional offering of ‘Baby Says’ maintains a simmering balance of pitch and strum, and the ghostly duet of Mosshart and Hince, speaking of dark eyes, pinball lights and dogs of war blows down a deserted midnight boardwalk of sound towards your from afar, with its repeating lick- reminiscent of the Stone’s ‘Gimme Shelter’- plinking gently like rain. ‘Damned If She Do’ and ‘You Don’t Own The Road’ work off each other to create a vibe of leather-strapped road menace, twisting words back on themselves, blooming on the wounded, wild dog vocals of Mosshart and Hince. ‘What could be stranger than to be stuck outside your cage?’ they ask, and it comes off as more rhetorical than anything. Closing on the swamp-stompy slide-blues gumbo of ‘Pots and Pans’, The Kills cut the sparest track of the album, using a single steady beat and Jamie’s careful guitar work to anchor a bittersweet Cajun-flavored melody that could have easily come straight off of Mean Side or No Wow.

The lyrics in Blood Pressures are important to pay attention to, as well as who is singing what and who isn’t. Because this is a crucial part of what has sustained The Kills for eight years: chemistry and mystery. Known for playing their live shows both towards and for each other, VV and Hotel come off as allowing the audience to voyeuristically listen in almost as an afterthought. The shade of this feeling is there in Blood Pressures, because although The Kills have kept their private relationship out of the spotlight, they instead express beautiful cryptic hints about the nature of their musical bond through lyrics that come to resemble a back and forth dialogue of unresolved sexual frustration. Hince and Mosshart call to each other over the gulfs between tracks, and what ultimately makes Blood Pressures their best album so far, is the feeling that it wasn’t quite made for us- it was made for them.

WRITTEN BY MY GO TO KILLS ENTHUSIAST: DEVIN GOODWIN
You should expect more from this bad mama-jama on our blog, although this is our first EVER guest review... I'm pretty sure no one can knock this kind of keen fervor and eloquence. Thanks Devin, No one could have done it quite like you.
Posted by: Molly Young