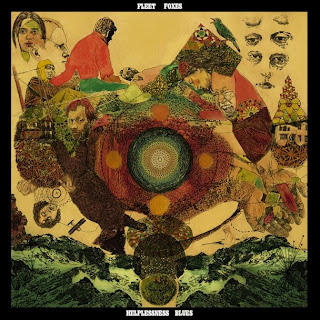 The Fleet Foxes’ sound is undeniably and immediately recognizable, haunting listeners’ ears ever since their self-titled debut album came out back in 2008, garnering positive reviews from just about every major outlet in the country- as well as overseas. Helplessness Blues is exactly the follow-up you were hoping for, unless you were more thrilled at lead vocalist Robin Pecknold’s comments about how he wanted the band to move in a more jam-band-y direction. While Fleet Foxes certainly have the folk-musical pizzazz to cut a record like that, the real beauty of their sound springs from the group’s harmonic skill and Pecknold’s minstrel-esque vocals, which always sound like they’re coming at you from just beyond the edge of the trees.

Helplessness Blues is a triumphant twelve-track album, pulsing with the sound of mandolins, containing passionate lyrics about apples, and possessing the quiet thrill of a panoramic view from the top of a mountain.

What shines the brightest over the course of the album are the poignant lyrics, along with the prevailing sense of unity between the song titles, and the sounds they mask. ‘Montezuma’ earnestly croons earthy lines about the relationship between parents and daughters, acts of selflessness, death, rebirth, and dowries of gold teeth and jewelry. ‘Sim Sala Bim’ speaks of incantations and the figure of Delilah and finishes with a furious, full-bodied guitar strumming climax, while ‘The Cascades’ offers up the careful, snowballing guitar picking of lead guitarist Skylar Skjelset. Listening to Helplessness Blues feels like digging your hands into the dirt and maybe joyously sowing a field while eating a piece of fresh fruit.

Much of the album could indeed stand alone as an instrumental, and brings to mind folk-jammers such as American acoustic trio Nickel Creek, and the ghostly harmonies of Blue Oyster Cult, and creates a warm vision of pastoral romanticism that comes off most effectively in the title track. In ‘Helplessness Blues’ Pecknold calls the chorus to him around lyrics such as ‘If I had an orchard, I’d work till I’m raw/and you would wait tables and soon run the store/Gold hair in the sunlight, my light in the door’, before calming slowly and retreating back behind the last rolling hills. The most musically impressive song on the album comes in the form of the eight minute epic ‘The Shrine/An Argument’, which exhibits just about every kind of musical twist and turn you could think of for the Fleet Foxes. The only spot on the album where Pecknold’s voice threatens to burst through the golden ceiling his band has created, ‘The Shrine’ builds a beautiful tale of love lost, employing the images of wishing pennies in stone fountains and the lonely vastness of the ocean to weave a true bard’s tale of a love that reflects the passing of the seasons. Beginning with the scuttling guitar work of Skjelset, a ghostly chorus, and the flaming arrow of Pecknold’s voice, the song evolves into a wheel-turning strum fest that rolls out the lines ‘In the morning, in the morning/In the doorway holding every letter I wrote/In the ocean washing off my name from your throat’ before finally passing into a deliriously eerie cloud procession of brass and wind instruments, where the Foxes sorrowfully sing about lonely green apples and the washing out of the sea. It’s a marvelous track that offers up a feast for the ears- dissonance included.

Imagine if Fleet Foxes had been able to go with their original name choice of Pineapple? I doubt we’d be able to take seriously the happy waltzing lament of ‘Lorelei’-oddly reminiscent of Rogue Wave’s ‘Michigan’- that steps along to the one-two-three ratatat of the snare drum of Nicholas Peterson, while Pecknold muses on the fateful state of being considered ‘Old news, old news’ to a past lover even in the bloom of their relationship. Bouncing along merrily, but hiding a somber tone and images of chipped teeth and lines in the heather, ‘Lorelei’ anchors a strong last third of the album along with the victorious tone of ‘Grown Ocean’ and makes up for Helplessness Blues’ only low point: the sleepy simplicity of ‘Blue Spotted Tail’. Playing like a lost Death Cab for Cutie track, ‘Blue Spotted Tail’ enters and leaves with a whimper, on the soft-soft vocals of Pecknold, almost failing to register on the otherwise musical and lyrical feast of the album.

With everything from a hammer dulcimer to a lever harp, a pump organ to a Marxophone, a woodwind section to Tibetan singing bowls, there’s a sound for everyone on Helplessness Blues, where the Fleet Foxes are able to make the sun rise and set to the harmony of their stunning musical arrangements. Here’s a band that’s utterly confident in its sound and creative process, and nearly every facet of their second album shines with this self-assurance. Hopefully there’s much more to come from these Seattle folk gems.