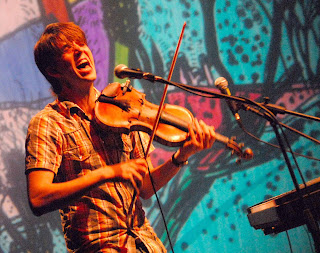 On September 13th, Owen Pallett opened for Dirty Projectors in the Wilbur Theatre. I had never heard of him before, but after his performance I was left speechless. To begin with, his sound was so rich and powerful that it is astounding he is a solo act. Even though he performed with a drummer, it was clear that he was the mastermind of the entire composition. In most of his songs, he controlled synthesizer effects and samples on a keyboard while playing the violin at the same time. Then he looped the melodies from the violin and harmonized on top. His skill for overlapping melodies with strings reminded me of a hardcore Andrew Bird. Yet Pallett was much more electrifying and edgy. Everyone in the audience seemed surprised by his performance. In my case, he wasn't at all what I was expecting; being used to generic Indie band openers. His music on the contrary is extremely original: a mixture between classical music and alternative rock. It could stand strong as purely instrumental, yet his voice truly adds to the music with a calm and deep tone. Pallett was previously known as Final Fantasy, which in my opinion suited him quite well; his performance really felt like a entering into a fictitious world of possibilities.