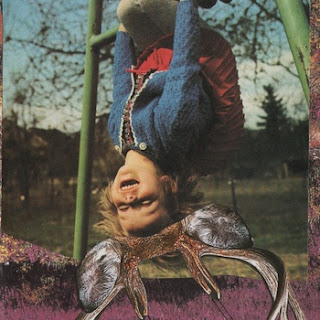 Way back in 2010, our staff made lists of their top albums of the year. A couple weeks ago, I heard about a band from Boston named Pile. They played at Hen House with another local favorite, Fat History Month. They performed songs from their newest album "Magic Isn't Real" which was released on October 2, 2010. The album has topped my list.

I downloaded "Magic Isn't Real" on their bandcamp site and have listened to it on loop since their show at Hen House. By the crowd's sing-along enthusiasm during their most recent perfomance at another Allston DIY venue, Gay Gardens,  I could tell that everyone has also been listening to their music constantly.

The problem I'm having with Pile is figuring out how to describe their sound. It has heavy push-n-shove tracks layered with catchy grooves like in "came as a glow" followed by unpolished, amazingly unpredictable tracks like "pets." They're... intriguingly infectious. Staffer Mariella explains Pile better than I can, saying "I'm pretty sure Pile incorporated some sort of weird sonic sound waves into their album to make it addictive. The way cigarettes have nicotine in them."