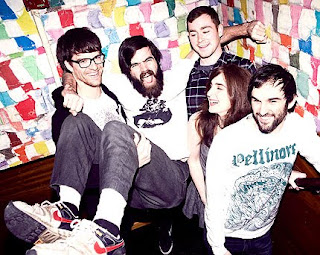 I would just like to say thank you, thank you to Bill. Who is this Bill? Well, the beautiful young Northeastern scholar who informed me of the Titus Andronicus viewing extravaganza. Thanks to Bill and Tastemakers I got to check out Titus for the second and oh so sweet time. Unfamiliar with the geography of Northeastern, I prowled the streets in search distinct rock concert indicators, loud music, raucous crowd, and confused on-lookers.
Finally approaching the allusive Centennial Plaza, I walked forth embraced by the tunes of electric hip-hop duo, Javelin. Sampling tracks from genres across the board their high energy and extreme enthusiasm made even their version of London Bridge infectious.
Post Javelin I moved from the damp grass towards the stage for the Dodos. This Saturday having been one of impending rain, the sky was setting an eerie mood during the set change - an interesting shift from a typical club setting. Taking the Tastemakers stage just after a five week tour, the Dodos were happy to be completing their run with this final show. Only familiar with the solid reputation of the band, I was disappointed their show consisted of heavy sampling. Although I’m not completely against samples, its always seems like adding members would enhance a live show rather than forgoing them for non-interactive electronics. Either way as the show progressed I became less disillusioned by the samples forgoing my frustration for careless enjoyment. Intro-ing with “Trades & Tariffs” got the crowd jiving with full almost distant drums pulsing through us. Deep double vocals from guitarist Meric Long and drummer Logan Kroeber were bold and strong, supporting the nights frighteningly seductive aura.
After a solid close, it was now Titus’ turn to take the stage. As those close to me shuffled around asking curious questions about the next act, I shook with excitement. This being my second Titus show I knew what they were capable of and was too excited to stay still. Prepping once again, Amy Klein sized up the crowd as she bowed her violin. Pre-show, Klein looks reserved and unassuming, but once the music hits I knew she’d transform into a whole new person.
Not sure how the Northeastern crowd would ‘get down’, I was nervous for how crowd participation would effect the performance. My worries were immediately negated when I was thrust forward three feet as Titus’ first chords rang out - It seems I wouldn’t be let down.
Instead of analyzing every note and movement I decided it was time to let lose for their performance - commit to the anarchy with complete abandon. What a fantastic idea it was, Titus Andronicus’ reckless world sweeps you up and has power like no band I’ve seen live. The doom and gloom of the night was matched by the power and energy ripping off guitars, drums, and vocals. As Klein killed it on her blue electric violin I had never seen anything more beautiful or intriguing in my life.
A band that puts on a show better than anyone I’ve seen, the night ended with lead, Patrick Stickles, words of advise: “Goodnight, study hard, go to class on time and don’t stay up all night partying.”
How can I not abide by these demands from masters of rock?
Check Out Tastemaker's BLOG