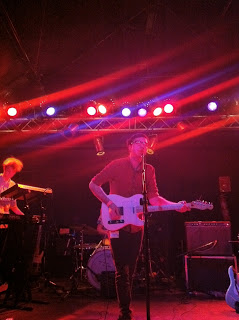 Cambridge based Cuffs (which includes a member of Big Troubles) kicked off the night with high energy and danceable tracks. Their dreamy, scintillating sound was the perfect opener for the night, and they looked like the coolest professors at your college. This was one of the few times an opening band really captivated me and made me interested in going to see them again.

After that, The Babies took the stage. The Brooklyn band features members from Woods and Vivian Girls, and their alt-country, laid-back vibe was deeply appreciated by the crowd. While their set seemed to run a little on the long side, the use of female and male vocals and the short length of their songs kept their set going from start to finish.

Quickly after they were finished, Real Estate came on to kick off their East Coast tour. While they were sure to perform almost all of the tracks from their latest praised album Days, (reviewed here) they managed to cover all the bases and drew from their earlier works, playing “Fake Blues” (free download) and “Suburban Dogs” from their first self-titled album. Highlights were bassist Alex Bleeker-led “Wonder Years” and “Easy”, the sonic equivalent of a breath of fresh air.

Rarely do I leave a show feeling fully satisfied with the setlist, but Real Estate truly delivered, ensuring older devotees would be just as pleased as new fans. Even if you just dabble in Real Estate, go see them if you get the chance - you’ll leave totally in love with their music.